After a disastrous start and “welcome” to the new venue in Berlin for the Hozier concert, the performance itself didn’t disappoint, although it really could! 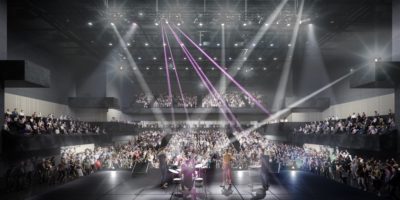 Not really the concert you would expect for me to go, but hey!, I like music that makes me feel good =)

I will just start with the disastrous and terrible first impression of the new venue in Berlin, the Verti Music Hall. It is located next to the Mercedes Benz Arena, formerly known as O2 Arena, so it is in what Berlins Tycoons are trying to convert into a really posh center for tourists. Well, that’s first of all not what Berlin is about, but not important right now.

The thing is, arriving at the venue as expected I couldn’t go in with my backpack, but the first strike was that the place to leave the backpack was a really not trustful looking container 100m away from the entrance, and paying 5 Fucking euros (when the day before I paid only 2 at the Columbiahalle) to leave my stuff including my jacket by -3°C (I was not about to pay more money just to leave my jacket inside) and having to freeze back to the entrance and on the way out really pissed me off.

Strike 2 was the price of the beer, which for me is part of the whole set of the experience. 5,5 EUR for 0,5L one-way plastic cup, and 8 EUR for a 0,75?? Really? For Jever which is comparable to Beck’s, that you know is not a good beer!

Final Strike was, believe it or not, there were fucking sitting places, yes, chairs all over the venue so no one could stand. What kind of concert is this? An Orchestra? Ohh that really got to my nerves. Poor Lara that was with me hat to deal with my fury and the smoke coming out of my nose!

But now, for the part that really really really matters…Hozier, the concert and the experience.
Of course nobody stood still on their chairs afters the first note from the band, we all ran to the stage looking for space on the front row to delight ourselves with music and lights. And we did it, we got the the front of the stage. Hozier’s voice is as incredible as it sounds in the albums and did not disappoint, not even for a second.

Between new and old lyrics, the band made the crowd scream, dance to love ballads and sing along. Must say, the lead singer is not a big showman as I usually look forward to see, specially after a bomb of entertainment from Frank Turner the night before, but it was just the right amount. He even joked sarcastically about the crowd being able to follow rules and sit still^^

Apart from the venue disappointment the concert was really fun and although I don’t think it was worth so much money I’ve enjoyed it very much.