With a feeling of curiosity, happiness and sadness I enjoyed the last concert of this year. I discovered Montreal a couple of months ago through a friend and decided the same day I would get the ticket, but had to wait until December to enjoy the show. The 15 years celebration of the band did not disappoint! 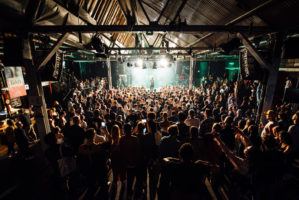 Just my type of concert! Good and funny music, entertainment with some interaction with the public and the band just enjoying what they are doing. The laughs and sparkles in the eyes is what I love to see in the band during a concert and Montreal didn’t disappoint.

The concert started a bit later than expected and although the support band was not bad, they were not as inspiring as you would expect for a concert on a Friday night so I was happy when Montreal finally entered the stage and got the mood up!

The 15 year celebration was everything you would expect. Songs old and new, fun, flaming Sambucas brought up to the stage (not so successfully) by the infamous Max Power and a countdown with a timer to make sure “120 Sekunden” was exactly that, 2 minutes long, and they made it!

Half way through, I think I felt momentarily “in love” with Hirsh, the Bass Player/ Singer, as he reminded me of someone who used to be really important to me and he was having so much fun and making jokes, that really get’s me. But well, my chances were low hehe, so I settled for a autograph instead of going for rejection, stupid I know, but hey, now I have the best memory^^

Loads of storys were shared, a sing along to every song, jumps, smiles, moshpits and a lot of new trials made the evening special, amazing and the best final to a year of AWESOME concerts.